The natural health resort of Vranjska Spa is situated at 12 km north-east of Vranje, 360 km away from Belgrade, 115 km from Nis, and only 5 km far from Belgrade-Athens highway.

Vranjska Spa, set at the altitude of 420 m, is encompassed by the following mountains:
Besna Kobila (1922 m),
Patarica (1806 m) and
Srpska Cuka (1415 m), the wooded slopes of which shield it from strong and cold winds, providing for the moderate-continental climate to prevail.

Even the prehistoric man used to bathe in the hot springs at the banks of River Banjstica that runs through Vranjska Spa, dashing from Mt. Besna Kobila – as testified by the finds of the pottery and urns.

People had continually been attracted by the magical power of the thermo-mineral waters of this Spa, where Dardans, Thracians, Illrycs, Celts, Romans, Byzantines… used to dwell.

Although Vranjska Spa was known as a curative place in the time of Serbian medieval state, it reached the peak of its reputation in the course of Turkish rule over these areas.

It was first mentioned in written documents in 1412, when the Spa was devastated by Turkish emperor Musa, and then in 1454 when Serbian lord Nikola Skobaljic defeated Turkish troops there.

The next mention dates from the end of the 17th century, from the time of AustroTurkish War, when the Austrians had their camps in Vrajska Spa.

After the Turks won the war, they demolished the Spa again. Only many years later was rebuilding of the settlement around the springs started. At the end of the 18th century, Turkish pasha Djor-Mehmed from Vranje raised two pools, and his son Hussein built the third one in 1842.

Although by that time the Spa had for long been used for curative purposes, there were no buildings for accommodation of the guests till 1860. That year, a caravanserai and a small building with three rooms were built.

Vranjska Spa started faster and better organized development only after January 1878, i.e. after liberation from Turkish rule. Prior to Balkan Wars (1912-1913), as many as ‘six big hotels and 19 small ones11 had been built, such as the Drzavni (State) Hotel (the building of the Institute of today), Balkan, Kosovo, Zora, Bosna, Grand…

Prior to the First World War, Vranjska Spa was a renowned natural health resort. Guests from abroad, mainly from Greece, used to stay there. (In 1914, King Peter 1 Karadjordjevic underwent treatment there and was provided with his own cabin and bath tub, kept there even today.) After the First World War, development of Vranjska Spa was resumed, so that several new villas were built.

The first sanatorium building was built in 1929, together with baths, water supply system, electric light system, tapping of new springs…

Between the two world wars, the Spa attracted guests from abroad, again mostly from Greece, but from Austria as well.

After the Second World War, development of he Spa continued – hot springs were tapped, the River Banjstica bed was regulated, a dam built and the park, with some rare samples of flora, was landscaped, and almost all catering facilities refurbished and adapted. (The State Hotel, once a cure-saloon, was turned into the attractive Kicer Restaurant.)

Vranjska Spa is proud of its thermal springs. The warmest thermo-mineral waters in Europe spring in this place. (Only the thermal waters of Iceland and Yellowstone geysers are warmer than these.)

There are several springs of plentiful healing water: the Big Drinking Fountain, Sulphureous Spring, Ferrous Spring, as well as Mixed and Hot ones…

Water temperature varies from 61° C at the ferrous water spring to 84° C at the sulphureous upper spring, and 94° C at the main spring (up to 110° C when taken from the drill..) (The three springs are situated next to the Institute for Rheumatism building.)

The most important chemical element of these thermo mineral waters are sulphur and iron, although it contains many other ingredients.

Depending on the illness and in accordance with doctors’ instructions, patients undergo bathing in water or in healing sulphureous mud, while inhaling and vaginal spraying treatments are also available.

These waters are used for both therapeutic purposes and by drinking. Treatments of degenerative rheumatism and posttraumatic states are conducted in the well medically staffed and modernly equipped Institute for prevention, healing and rehabilitation, opened in 1971. A team of various medical specialists and other medical staff applies many modern-day therapeutic procedures (electric, massage – manual, submerged, rigged, as well as kinesis, acupuncture…) 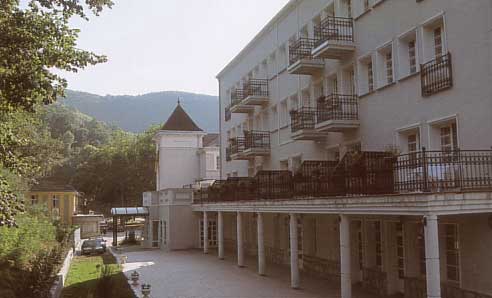 The unmatched curative waters, beautiful scenery encircled by the slopes of high mountains, moderately-continental climate and interesting environment also offer, besides the treatments and pleasant rest in this natural health resort, picnics to Vranje, the old artisan and trade centre rich with cultural and historical monuments, and to its near and far surrounding: Markovo Kale – a medieval fortress, Aleksandrovacko Lake, Vlasinsko Lake (at 1213 m altitude), or to nearby Bujanovacka Spa and Prohor Pcinjski Monastery (11th century)…